It’s being reported that a Washington DC-based PR Firm named Levick was hired by persons within the Nigerian government and allegedly paid $1.2million to help fix the government’s lagging reputation in the aftermath of the Chibok crisis.

Statement regarding the cancellation of meeting with parents of abducted Chibok children and five escapees.. (supposedly sent out by Levick)

“It now appears that our fight to get the girls of Chibok back is not only a fight against a terrorist insurgency, but also against a political opposition.

“It is with great regret that I announce the cancellation of the meeting with 12 parents of the abducted Chibock children, as well as five of the brave girls who escaped from the terrorist organization Boko Haram. I scheduled this meeting, which was to be open to the media for coverage by Nigerian and international press, to listen to their stories and to privately brief the parents and the girls on our efforts to rescue the abducted girls.

“Unfortunately, political forces within the Nigerian chapter of Bring Back Our Girls have decided to take this opportunity to play politics with the situation and the grief of the parents and the girls. They should be ashamed of their actions.

“Those who would manipulate the victims of terrorism for their own benefit, are engaging in a similar kind of evil: psychological terrorism.

“I want to be clear, this government stands with complete solidarity with the girls and their parents. We are doing everything in our power to bring back our girls. Despite the shameful and disgusting games being played by the Nigerian chapter of Bring Back Our Girls, as a father of girls, I stand ready to meet with the parents of our abducted children and the truly brave girls that have escaped this nightmare through the grace of God.”

And here’s the report from snddenjpic.org that Levick has taken president Jonathan on as a client..

#Bringbackourgirls convener Oby Ezekwili took to twitter to angrily slam the PR Firm which she says was hired by the presidency to deceive and alternate the truth for Nigerians. 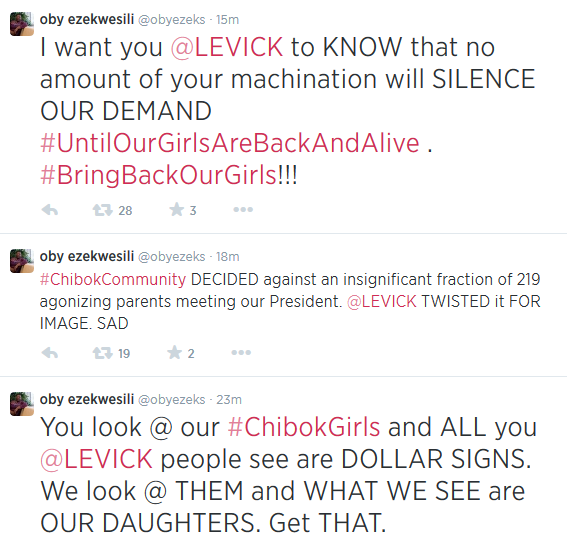 This Went Down Between Oby Ezekwesili and Bukola Saraki Earlier Today

Nigerians Drag Kizz Daniel In Reaction To His Arrest In Tanzania

Again, Wizkid wins big with Essence & Made In Lagos

5 More Nigerian Artists We Think Can Do What WizKid Did...

4 Nigerian Web Series You Should Totally Be Watching